HandyCon is biannual board game convention which focuses on playing games as opposed to accumulating them. It was originally held in High Wycombe and takes its name from the Handy Cross roundabout on the edge of town. Tragically however, news of its existence took a long time to filter into our Wycombe-based headquarters, and by the time it reached us they had skipped town for the sunny uplands of Maidenhead.

Despite this setback, we are pleased to announce that we’ll be sailing down the A404 this coming weekend for HandyCon 6, HandyCon August 2019, or whatever you wish to call it. Not to mention, we will be seizing on yet another opportunity to playtest Circulari! We have another couple of gameplay tweaks to test and we’d love to have your feedback.

Playtesting at HandyCon works a little differently to other events we’ve been to. At a typical Playtest UK event for example, designers have relatively short slots and there are a lot of volunteers to help funnel players into games and keep occupancy high. I’m told that HandyCon, on the other hand, is a more leisurely experience. Table slots are nice and long, but the getting people interested in playing is subject to fate.

Come and help fate smile on us, Circulari will be on the table:

Lots of things have been going on here Ruined Sky Games headquarters lately: the first playtests of Circulari’s solo rules variant, our attempts to use a cutter-plotter to make prototype components, and work on validating game balance using a computer simulation. Clearly we’ve got a got a lot of blogging to catch up on, but this post is dedicated to just one thing – our new logo!

I’m sure you’ll agree, it’s much more attractive than its predecessor. It incorporates the company name in an attractive font, so you can tell who it belongs to at a glance, and comes in range of different arrangments suited for every ocassion. It even looks fetching atop the Circulari black hole graphic as pictured above.

All that remains is to update everything. From favicons to social media accounts the old logo has wound up in lots of places. Got to catch ‘em all! 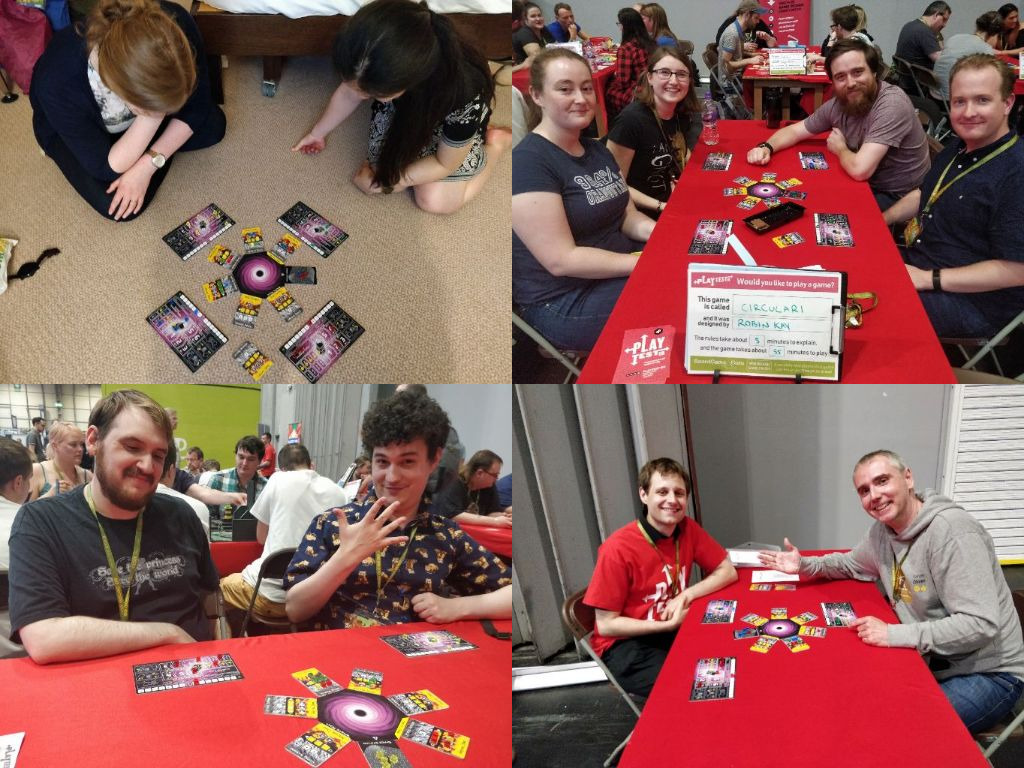 Alas, the UK Games Expo comes but once a year. It’s over now for 2019, but 2020 dates have already been announced and everyone on Board Game Twitter seems to be frantically booking hotel rooms already. The circle of life continues!

The following day I hit the Playtest Zone and got 2 games into our slot. Playing Circlari involves a lot of thinking and I often find myself looking at play-testers' furrowed brows with a bit of trepidation during the game, so it was such a pleasure to find out that both groups really did enjoy themselves at the end. As a bonus, I had a chance to meet YouTuber To The Table Games who joined in the first game and then recorded a short video of me taking about my favourite game component.

Lastly but by no means least, on Sunday we met up with Oliver Kinne from Tabletop Games Blog to play our fourth and final game of the expo. We’ve been reading Oliver’s blog for some time now and it great to meet him in person. Although we failed to execute on our plan to let internet celebrity win, he seemed to enjoy Circulari anyway and you can read more about his experience of the expo and first impressions of Circulari on the Tableop Games Blog.

Can’t wait for next year!